The funds represent North Carolina’s share of the $2.9 billion federal settlement with Volkswagen (VW) due to its misrepresentation of diesel emission standards in certain vehicles. The Division of Air Quality was designated as the lead agency to manage the project in 2017 by Governor Roy Cooper, and Wilmington Trust officially named North Carolina as a State Beneficiary in January 2018.

The NC Clean Energy Technology Center (NCCETC) partnered with the Division of Air Quality to host a series of public information sessions in July to explain the draft plan to those interested in receiving funds for eligible projects. The recordings and presentations from the public information meetings can be found online here.

A series of in-person public information sessions will also be held for counties eligible in the Historically Under-Resourced Counties Outreach Program. Additional meeting dates, locations and times will be posted on the DEQ Volkswagen Program webpage. 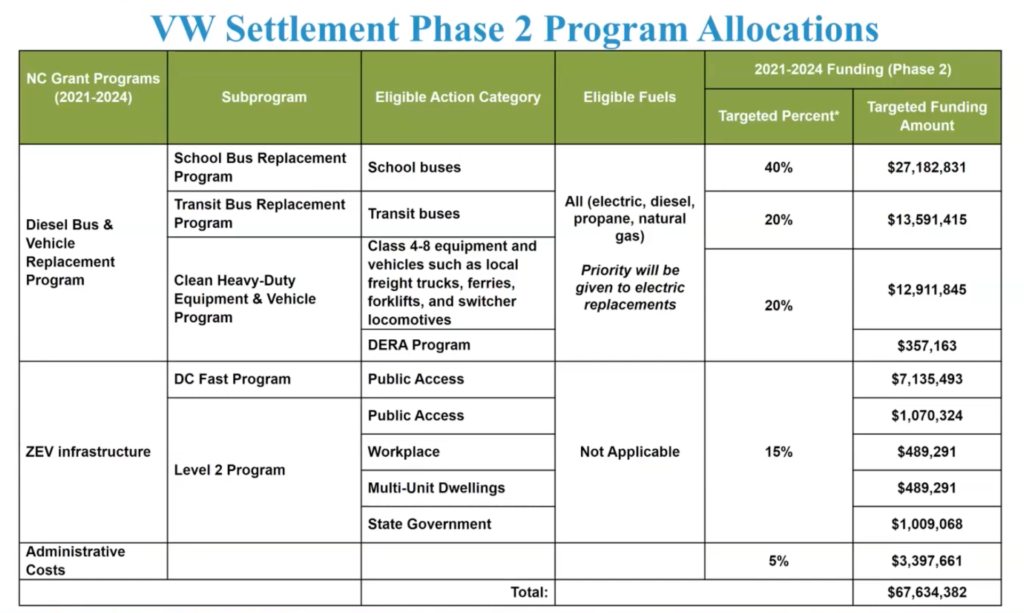 The DEQ’s ZEV Infrastructure program was designed to expand the state’s ZEV charging infrastructure network along priority designated corridors. Phase 2 proposes a dedicated allocation for light-duty charging projects and the DEQ plans to coordinate with the NC Department of Transportation to determine optimal locations for these EV charging stations for state fleet vehicles and attractions on state owned property.

“These funds from the VW Settlement represent an opportunity to advance clean and sustainable transportation in North Carolina,” said Heather Brutz, Finance & Operations Manager for NCCETC’s Clean Transportation program. “We encourage interested parties to read over the plan and submit comments on how this round of funding will be allocated.”

Comments on the Draft Phase 2 Mitigation Plan may be submitted online via Microsoft Forms or emailed to daq_NCVWGrants@ncdenr.gov. Voicemail comments will also be accepted at 919-707-8429.