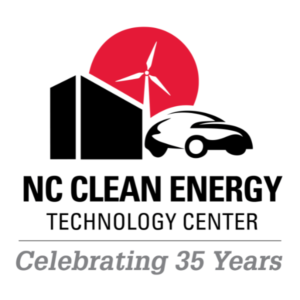 The North Carolina Clean Energy Technology Center (NCCETC), at N.C. State University, advances a sustainable energy economy by educating, demonstrating, and providing support for clean energy technologies, practices, and policies. For the last 35 years, the Center has worked closely with partners in government, industry, academia, and the non-profit community while evolving to include a greater geographic scope and array of clean energy technologies. As a result of this evolution, the Center has grown into a state agency respected for its assistance to the burgeoning “clean tech” sector in North Carolina, as well as one of the premier clean energy centers of knowledge in the United States.

Please join us in celebrating the Center’s 35th Anniversary in 2023 as we take a look back on 35 highlights from over the years. 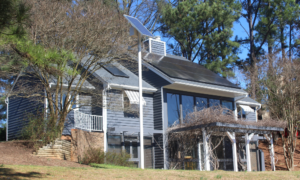 1. The N.C. Solar House was built in 1981 and designed to incorporate readily available solar and energy-efficient technologies to serve three primary purposes: (1) to demonstrate how solar and energy-efficient technologies can be effectively incorporated into a solar house of traditional design typical of the region; (2) to serve as an educational resource and laboratory for students, clubs, professional organizations and the general public; and (3) to serve as a research laboratory for graduate students in engineering, architecture, interior design and other related disciplines.

2. The N.C. Clean Energy Technology Center, or “Center”, was first established in December 1987 as the North Carolina Solar Center. The state government of North Carolina, N.C. State University, and the solar industry came together to launch the Solar Center with sponsorship from the State Energy Office to meet the need for a central clearinghouse that could assist the state’s citizens, businesses and institutions in using solar energy. Since its formation, the Center has concentrated a large portion of its resources to train professionals and to provide educational opportunities for decision-makers and the public to learn about solar energy.

3. The Solar Communities Program was created in 1989 to extend Center services and programs into selected communities across the state. In each “Solar Community,” the Center teamed with the county office on the N.C. Cooperative Extension Service to a staff a steering committee of local leaders and energy professionals.

4. In 1991, the Solar Communities Program was awarded the National Environment Achievement Award by Renew America.

6. The Solar Center entered the international arena in 1995, providing internet training and technical assistance to the International Solar Energy Society at its bi-annual conference in Zimbabwe. 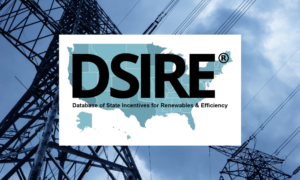 7. Established in 1995, DSIRE is operated by the N.C. Clean Energy Technology Center at N.C. State University and was originally funded by grants from the U.S. Department of Energy.

8. The Center received funding from the Rotary Club in 1997 for the Solar Center PV Program in Bolivia. The Center installed photovoltaic systems on 15 rural schools in the Alalay region in the Andes Mountains. 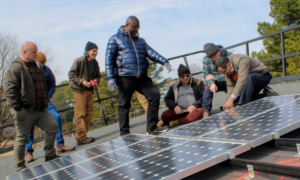 11. The Center became the only training provider in North Carolina to have been awarded as an Interstate Renewable Energy Council (IREC) Institute of Power Quality (ISPQ) Accredited Training Program Provider in 2004. After an intensive 18-month process including an extensive site assessment, the Center’s thermal and PV courses were awarded as IREC ISPQ Training Programs– the highest international accreditation standard for renewable energy training programs.

14. The Center managed the NC Biomass Council, which produced The North Carolina Biomass Roadmap: Recommendations for Fossil Fuel Displacement through Biomass Utilization report in 2007 to increase biomass utilization and the production of in-state biofuels, biopower and bioproducts. 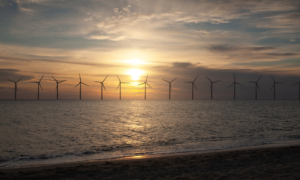 16. In 2014, the Center developed a new internship program which allows us to better serve undergraduate and graduate students at N.C. State University and beyond.

17. During the last month of 2014, the N.C. Solar Center officially changed its name to the N.C. Clean Energy Technology Center (NCCETC).

18. The State Energy Conference of North Carolina is an annual conference hosted by NCCETC and N.C. State University’s McKimmon Center. Over the last six years, NCCETC has grown the State Energy Conference from around 400 to over 900 attendees from a variety of backgrounds, including state and local government, non-profits, startups, academia and corporate organizations – all joined under the SEC’s theme: “Connecting North Carolina’s Diverse Energy Economy.” 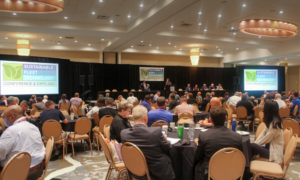 19. In 2017 the first annual Sustainable Fleet Technology Conference & Expo was held to expand education, training, and networking on advanced clean transportation technologies. The event has been hosted every year since (even going virtual for two years during the pandemic), reaching audiences from across the Southeast totaling more than 4,000.

20. The N.C. Clean Energy Technology Center publishes three quarterly reports that provide a comprehensive review of policy changes under consideration related to three technology areas: (1) The 50 States of Solar, (2) The 50 States of Grid Modernization and (3) The 50 States of Electric Vehicles. The 50 States report series is intended to keep industry stakeholders informed of policy and regulatory changes in the clean energy sector with timely, comprehensive, and unbiased updates. Reports provide a complete review of quarterly actions, summarized by our team of state policy experts, along with links to primary sources, summary graphics, and analysis.

22. The NCCETC received a grant award from the Solar Energy Technologies Office of the U.S. Department of Energy in 2016. This project, named Community Solar for the Southeast, was created to provide resources and to support the development of community solar programs at electric cooperatives and municipal utilities across the southeastern United States. Over four years, NCCETC worked with a number of coops and munis to understand the challenges of developing community solar programs and develop resources that can aid in the development of community solar projects across the region. The project concluded in 2020.

23. The NCCETC and the North Carolina Sustainable Energy Association (NCSEA) managed the development of a Template Solar Ordinance which was published in 2016. This template ordinance provides consensus input on a best practice model for how solar development can be regulated and facilitates the adoption of local regulation backed by industry, government and citizen input.

24. The U.S. DOE announced the selection of a team led by the N.C. Clean Energy Technology Center at North Carolina State University as one of eight new regional Combined Heat and Power Technical Assistance Partnerships (CHP TAPs) in November 2017. The Southeast CHP TAP at NCCETC promotes and assists in transforming the market for CHP, waste heat to power and district energy technologies/concepts in the following eight southeast states: North Carolina, South Carolina, Tennessee, Kentucky, Georgia, Alabama, Mississippi and Florida, as well as Puerto Rico and the U.S. Virgin Islands.

25. The NCCETC was a part of the Powering Energy Efficiency and Impacts Framework (PEEIF) project, a two-year U.S. Department of Energy (DOE) sponsored initiative, seeks to develop a data-driven framework to increase energy-related program effectiveness in low-income households. The project’s final report was published in March 2019. 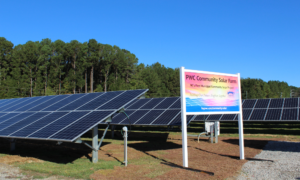 26. In 2019, Fayetteville Public Works Commission opened the first municipal community solar farm in North Carolina. NCCETC provided a technical and economic analysis for the community 1.5 MW solar photovoltaic array, including a 560 kW battery, to help the municipal utility consider the viability, costs and value of the renewable energy in an effort to meet renewable energy requirements and promote customer participation in solar.

27. NCCETC introduced its Energy and Sustainability Services (ESS) – a suite of services from the Center aimed at optimizing sustainability and energy-related objectives for business, industry, government and utilities – before hosting the first installation of the ESS Webinar Series in December 2020.

28. Solar-Plus for Electric Co-ops (SPECs) was launched in 2020 to help optimize the planning, procurement and operations of battery storage and solar-plus-storage for electric cooperatives. SPECs was selected by the U.S. Department of Energy’s National Renewable Energy Laboratory (NREL) for Round 2 of the Solar Energy Innovation Network (SEIN).

29. The Database of State Incentives for Renewables & Efficiency (DSIRE), operated by NCCETC, and EnergySage partnered to enable homeowners to find, research and receive quotes on solar installations all on the DSIRE website. Also in 2020, DSIRE announced the launch of two new research offerings through DSIRE Insight related to the Public Utility Regulatory Policies Act (PURPA) and investor-owned utility avoided cost rates. 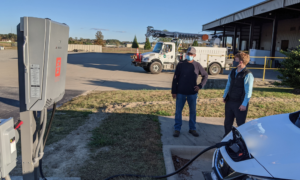 30. At the end of 2020, NCCETC partnered with Roanoke Electric Cooperative to demonstrate cutting edge vehicle-to-grid technology. For two years the Cooperative worked with Fermata Energy to pilot the first electric vehicle charging system that meets the North American standard for two-way current as verified by Underwriters Laboratories (UL). Preliminary findings from this demonstration showed the economic potential of using bidirectional charging technologies to feed energy stored in electric vehicle batteries back to the grid or a building, especially when the grid is experiencing high demand.  Now after two years, the value streams are clear.

31. As part of Governor Roy Cooper’s Executive Order (EO) 80, the North Carolina Department of Commerce commissioned a report, which was researched and produced by BVG Associates and a team of experts from Lloyds Register Energy Americas, Timmons Group and NCCETC. The full report, Building North Carolina’s Offshore Wind Supply Chain, was released in 2021 and is available online at nccommerce.com.

33. The two-year project “Planning an Affordable, Resilient, and Sustainable Grid in North Carolina” (PARSG), concluded in 2022. The project began in 2019 after North Carolina received a competitive award of $300,000 from the U.S. Department of Energy. PARSG is a joint project by the N.C. Department of Environmental Quality (DEQ), UNC Charlotte’s Energy Production Infrastructure Center (EPIC), and NCCETC. The project included opportunities for interested stakeholders to review metrics developed by the research team and provide input into an advanced grid scenario focused on enabling a more decentralized resilient grid, including micro/mini grids that can support critical services, such as hospitals, in the case of power outages. As part of PARSG, NCCETC partnered with New Hanover County to conduct resiliency analyses of local facilities and provide potential solutions which could ensure a reduction in the cumulative hours customers are without power after an outage.

34. Staff from the NCCETC served as SolSmart advisors to provide technical assistance to communities in North Carolina, South Carolina and Florida to help them receive a national SolSmart designation of Gold, Silver or Bronze based on actions across permitting and inspection, planning and zoning, government operations, community management and market development. The designation recognizes communities that have taken bold steps to encourage solar energy growth and remove obstacles to solar development. There are 19 communities in the Carolinas – 3 in South Carolina and 16 in North Carolina – that have achieved SolSmart designation as of April 2022.