National Drive Electric Week is an annual event held each October to celebrate all-electric and plug-in hybrid vehicles. The national campaign is presented by Plug In America, Sierra Club and Electric Auto Association and consists of hundreds of free events across the United States.

National Drive Electric Week began in 2011 to provide free, helpful and in-depth information for those beginning their electric vehicle (EV) journey. Today, more than two million EVs have been sold in the United States, and 96 percent of EV drivers report they will purchase another EV for their next vehicle, according to a recent survey conducted by Plug In America. 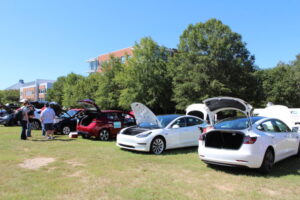 As with any new technology, people often have questions before they make the switch to driving electric, and National Drive Electric Week gives people the chance to interact with electric vehicles and ask EV drivers any questions they may have.

The Clean Transportation program at NC Clean Energy Technology Center (NCCETC) has participated in the campaign for many years now and, in 2020, sponsored five virtual webinars on electric vehicles topics including best practices and lessons learned of charging infrastructure deployment, idle reduction and EV options for fleets. This year, attendees will also get a chance to experience electric vehicles in-person at two EV ride and drive events at NC State University.

“After participating in National Drive Electric Week for several years now, I’ve seen the impact of giving people the opportunity to ask questions and get their hands on an electric vehicle,” said Richard Sapienza, Director of NCCETC’s Clean Transportation program, “When they leave, they’re confident in making the switch to going electric and several have purchased an electric vehicle following one of these events.”

NCCETC’s Clean Transportation program is also currently hosting free webinars showcasing the latest and greatest in sustainable fleet technologies and operations, including electric, as part of the 2021 Sustainable Fleet technology Virtual Conference. The conference began September 9 with “Electric Vehicle Infrastructure Planning Best Practices and Considerations for Today & the Future” (which is available to watch in full online) and includes two more upcoming webinars focused on EVs.

Links and event dates are provided below to learn more and register for upcoming National Drive Electric week events and webinars.

Can’t make it? Watch a Video Tour from an EV Driver Online Through Our EV Driver Profile Series 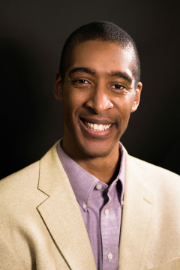 Those interested in going electric can also explore a variety of EVs and their drivers’ experiences driving electric in our Electric Driver profile series. Jarred White’s EV of choice is a 2013 Ford C-Max Energi hybrid, and he said, “One of the most significant advantages of driving a plug-in hybrid are the fuel savings on the ‘first and last mile’; short trips to the store where it’s nice to know that I’m only using electric.”

There are many benefits to driving electric, including high-quality performance and the notable quietness of an electric engine — something White has also expressed can be a con of owning an EV. “Because the engine is so quiet, I’ve accidentally left my car on overnight multiple times!” White explained.

Dave Erb has been involved in projects focused on and promoting EVs for two decades. Erb worked as an automotive engineer and spent the majority of his career in academia as faculty for UNCA Mechatronics Engineering. He also served on the Asheville Transit Committee until he reached term limit.

After purchasing his first electric vehicle in 2016, Dave and his wife were hooked and traded their last gas car in for another all-electric vehicle in 2019. The couple resides in Asheville, NC with their 2015 Chevy Spark EV and a 2019 Tesla Model 3. “We haven’t bought gas in over a year and a half,” Erb said.

If you can’t make it to an in-person event, the NCCETC has you covered! Watch the video below for a tour of Erb’s 2015 Chevy Spark EV and hear why it’s his EV of choice.

This September 25th through October 3rd, 2021, the United States will celebrate National Drive Electric Week, sponsored by Plug in America, the Sierra Club, and the Electric Auto Association. The celebration, which started in 2011, helps spread awareness about the benefits of driving electric, including decreased emissions, fuel savings and enhanced performance of electric vehicles (EVs). This year, National Drive Electric Week consists of hundreds of free events across the United States, both in-person and online.

The Clean Transportation program at NC Clean Energy Technology Center (NCCETC) has participated in the campaign for many years now and, in 2020, sponsored five virtual webinars on electric vehicles topics including best practices and lessons learned of charging infrastructure deployment, idle reduction and EV options for fleets.

Those interested in going electric can also explore a variety of EVs and their drivers’ experiences driving electric through our Electric Driver Profile series. NCCETC sat down with seven EV drivers to hear about the benefits of going electric. 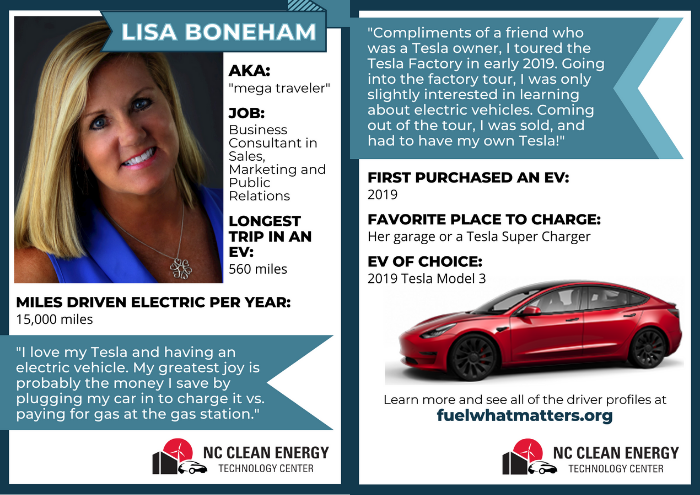 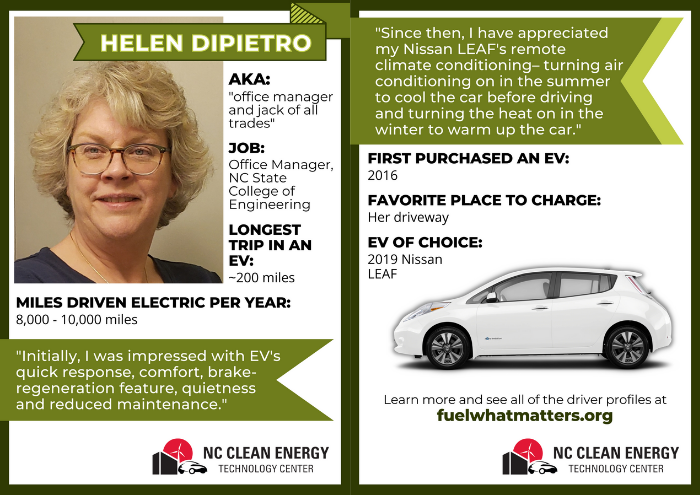 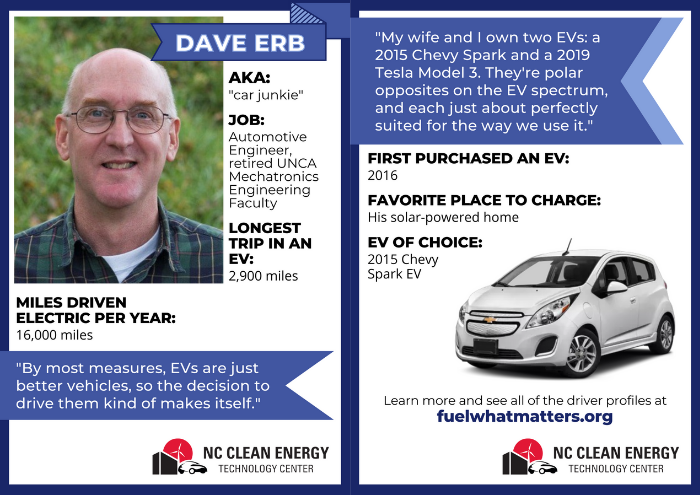 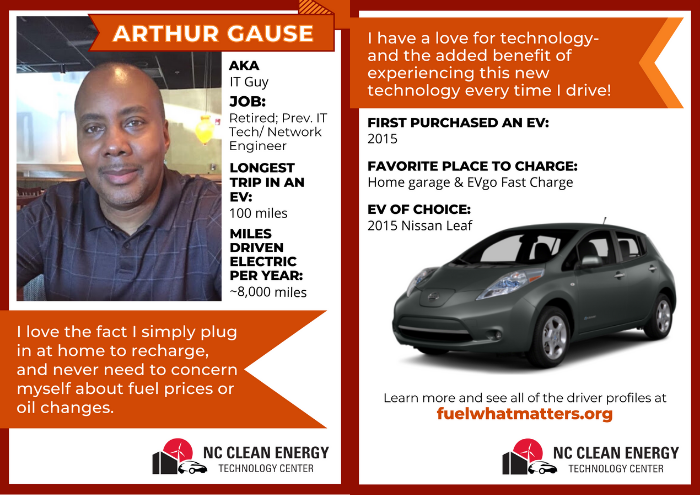 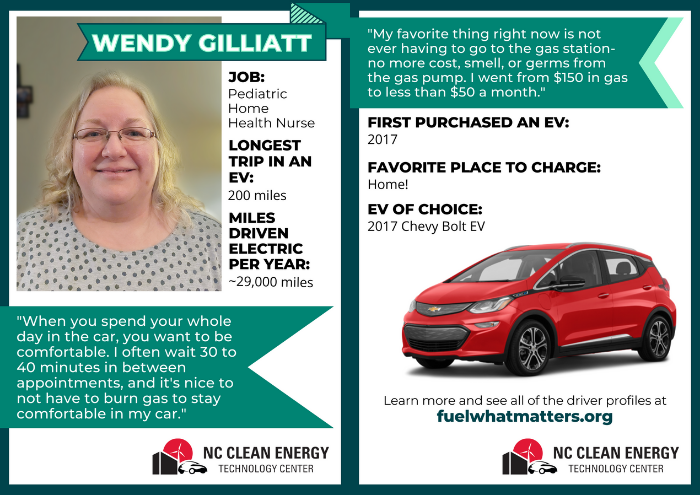 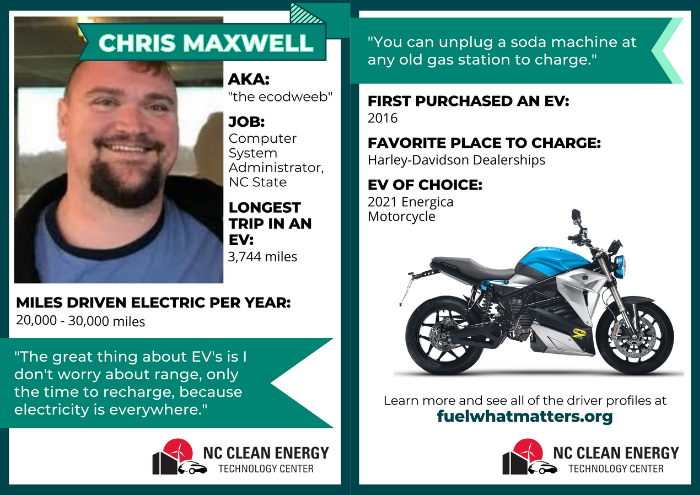 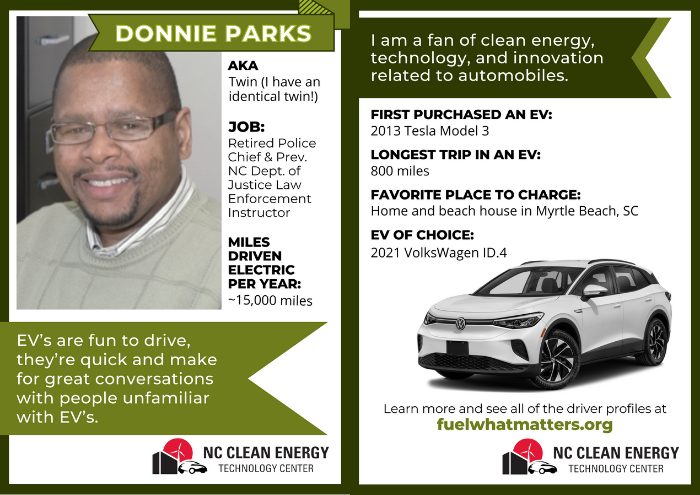 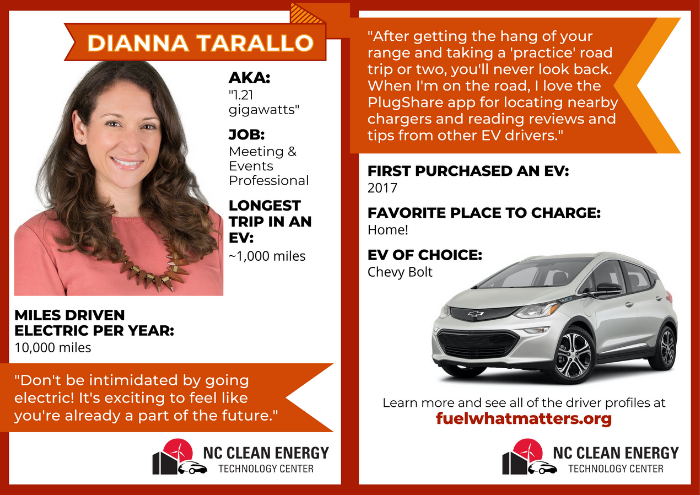 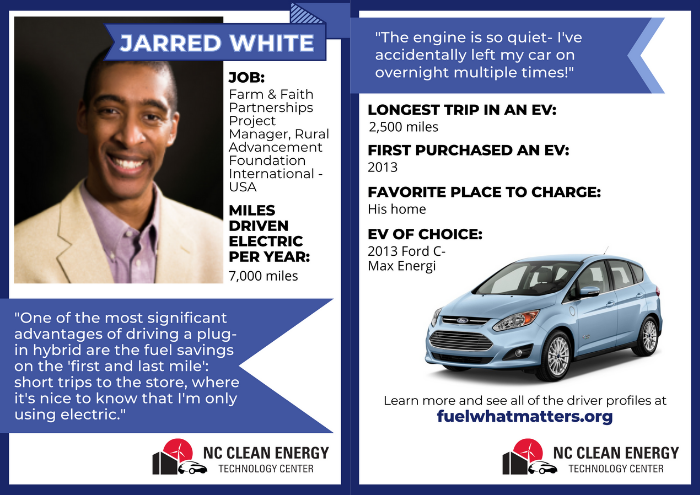 Links and event dates are provided below to learn more and register for upcoming National Drive Electric week events and webinars.

Please join the NC Clean Energy Technology Center to kick off National Drive Electric Week at NC State University in Raleigh NC with a tailgate and plug-in electric vehicle car show at the NC State versus Clemson football game.  For game-day on September 25th, due to the game-day congestion and traffic, if you do not have tickets for the game or parking arrangements, it is not advised that you come to visit the plug-in electric vehicle show.

Location is outside Close King Indoor Practice Facility in the parking lot of Carter Finley Stadium at the corner of West Chase Blvd. and Peter Karmanos Jr. Dr. 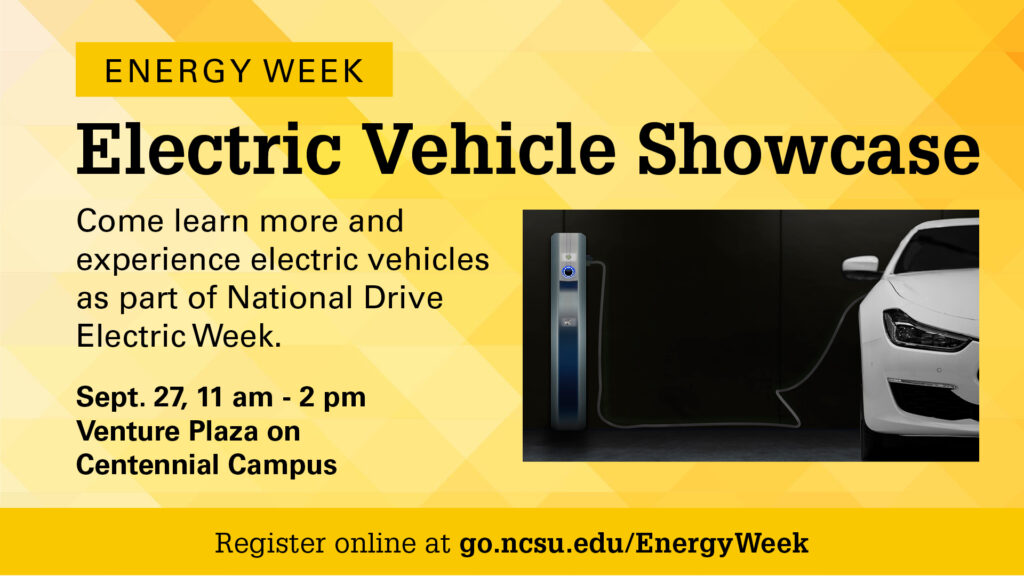 Join us to celebrate National Drive Electric Week, as well as Energy Week at NC State University, with an Electric Vehicle Owner Meet-Up/Car Show and Test Drive at Venture Plaza on NC Sate University’s Centennial Campus.  Venture Plaza is the open area near the Venture Buildings across from 930 Main Campus Drive.  Come learn about and experience electric vehicles. The EV owner’s meet-up will be at the open space across from 930 Main Campus Drive.  Non-EVs will have to park in one of the Centennial pay lots. (See:  https://centennial.ncsu.edu/visit/) There will be food trucks.

All attendees and volunteers are required to wear face masks whenever they are within six feet of another person at all National Drive Electric Week 2021 events.

Can’t make it out? Take a video tour of an electric vehicle instead!

Dave Erb purchased his first EV in 2016, but he worked on projects focused on electric vehicles dating back to 1992. Erb had a long career as an automotive engineer and came from the heavy truck and transit bus industry. He is a retired UNCA Mechatronics Engineering Faculty and also served on the Asheville Transit Committee until he reached term limit.

Erb and his wife own two EVs: a 2015 Chevy Spark EV (Erb’s EV of choice) and a 2019 Tesla Model 3. “They’re polar opposites on the EV spectrum, and each just about perfectly suited for the way we use it,” Erb said. He typically drives 16,000 electric miles per year and his favorite place to charge is at his “beyond net-zero” solar powered home.

The pair made their longest electric road trip in the Tesla. Erb and his wife drove 2,900 miles from Asheville to Minneapolis to Michigan’s Upper Peninsula to Ohio and back to Asheville. “We passed (without using) as least as many Tesla Superchargers as we used, and got quite a bit of our charging for no extra cost at the hotels where we stayed,” Erb explained.

“Any sustainable transportation system has to center around electrified powertrains, so I’ve made that my specialty since the mid-1990s. The most notable societal drivers for going electric are noxious emissions (criteria pollutants), energy supply, security and cost, and greenhouse gas emissions. There are also numerous purely automotive reasons to electrify including noise, vibration and harshness, driver feel, packaging flexibility and acceleration performance. By most measures, EVs are just better vehicles, so the decision to drive them kind of makes itself,” Erb noted.