Executive Order 80 affirms North Carolina’s commitment to reducing statewide greenhouse gas emissions to 40% below 2005 levels, calls for a 40% reduction in energy consumption in state-owned buildings, and calls for an increase in registered, zero-emission vehicles (“ZEVs”) to at least 80,000 – all by year 2025, according to a press release from Gov. Cooper.

The North Carolina Department of Transportation (**DOT’), in coordination with DEQ, shall develop a North Carolina ZEV Plan (“ZEV Plan”) designed to increase the number of registered ZEVs in the state to at least 80,000 by 2025. The ZEV Plan shall help establish interstate and intrastate ZEV corridors, coordinate and increase the installation of ZEV infrastructure, and incorporate, where appropriate, additional best practices for increasing ZEV adoption. DOT shall complete the ZEV Plan for the Council to submit to the Governor by October 1, 2019.

…and encouraging state agencies to purchase and use ZEVs:

Cabinet agencies shall prioritize ZEVs in the purchase or lease of new vehicles and shall use ZEVs for agency business travel when feasible. When ZEV use is not feasible, cabinet agencies shall prioritize cost-effective, low-emission alternatives. To support implementation of this directive, the North Carolina Department of Administration (“DOA”) shall develop a North Carolina Motor Fleet ZEV Plan (“Motor Fleet ZEV Plan”) that identifies the types of trips for which a ZEV is feasible, recommends infrastructure necessary to support ZEV use, develops procurement options and strategies to increase the purchase and utilization of ZEVs, and addresses other key topics. DOA shall complete the Motor Fleet ZEV Plan and provide an accounting of each agency’s ZEVs and miles driven by vehicle type for the Council to submit to the Governor by October 1, 2019, and annually thereafter.

“This is a good step towards generating awareness and interest for plug-in vehicles,” said Rick Sapienza, Clean Transportation Program Director at NC Clean Energy Technology Center (NCCETC). “It is going to take a sustained effort that includes policy, education and motivation through incentives to really move the needle – as well as patience.”

It was announced in October 2018 that plug-in electric car sales surpassed 1 million in the US. In 2017 alone, approximately 200,000 electric vehicles were sold in the US, the most yet for any year in the U.S. electric vehicle market, according to a recent 50 States of Electric Vehicles Report, from Q3 2018.

In North Carolina, according to ChargePoint, the state was third in the nation in EV growth in 2016, and Raleigh/Durham were the third fastest growing metropolitan areas for electric vehicles. In the last four years, growth has averaged more than 50 percent year over year, according to the Auto Alliance.

There are more than 3.5 million vehicles currently registered in North Carolina. Reaching the Executive Order goal would require registering about an average of 11,000 vehicles per year between now and 2025.

“The numbers are growing, but still represent a small percentage of the market,” Sapienza said. “There is plenty of room for growth.”

Charging infrastructure availability and range anxiety remain barriers to consumer adoption of electric vehicles, according to the 2018 50 States of Electric Vehicles report. As battery technology and associated vehicle designs and technologies improve, vehicle ranges are increasing, but the lack of more widespread charging infrastructure remains a deterrent to greater market acceptance in most parts of the country, according to the report. While market factors play a large role in this, legal and regulatory barriers are also affecting the pace and location of infrastructure development.

However, as electric vehicle battery prices drop, and driving range and performance improve, more vehicle manufacturers are announcing the launch of new, all-electric vehicle models, according to the recent 50 States of Electric Vehicles Report.

“The options and technology are getting better every year,” Sapienza said. “We are in a very interesting and exciting time with regard to transportation.”

School buses travel over four billion miles each year, providing the safest transportation to and from school for more than 25 million American children every day, according to the United States Environmental Protection Agency. However, diesel exhaust from these buses has a negative impact on human health, especially for children, who have a faster breathing rate than adults and whose lungs are not yet fully developed.

The 2018 School Bus Rebate Program will offer over $9 million to public and private fleet owners for the replacement of old diesel school buses with new buses certified to EPA’s cleanest emission standards. EPA will award selected applicants $15,000-20,000 per bus for scrapping and replacing old buses.

• Regional, state, or tribal agency that has jurisdiction over transportation and air quality, including school districts and municipalities
• Private entities that operate school buses under a contract with an entity listed above
• Fleets with up to 100 school buses may submit one application listing up to 10 buses for scrappage and replacement
• Fleets with more than 100 school buses may submit up to two rebate applications, each listing up to 10 different buses for scrappage and replacement

• Used to transport 10+ pre-primary, primary, or secondary school students to school or homes
• Driven 10k or more miles over the last 12 months or in use 3+ days/week during the school year
• Owned by applicant without any active liens
• Class 3-8 diesel-powered buses [greater than 10,000 lb Gross Vehicle Weight Rating (GVWR)]
• Buses powered by 2006 or older model year engines must be replaced with buses powered by a 2017 or newer model year engine
• Engine and chassis must be scrapped before receiving rebate payment

Learn more about the rebate program, your eligibility, requirements and deadlines by going to https://www.epa.gov/cleandiesel/clean-diesel-rebates.

The North Carolina Division of Air Quality is now accepting proposals to fund clean diesel projects.  More than $694,000 is available for eligible projects through the Mobile Source Diesel Emission Reduction Grant program, according to a press release.  Grants can be used to cover a wide range of projects, including repowering non-road construction or agricultural equipment with cleaner burning engines, converting vehicles to run on alternative fuels and repowering a locomotive.

Individuals, businesses and organizations from the public and private sector are eligible to apply. The division will prioritize funding for non-road equipment projects, according to the press release, but proposals for on-road and locomotive projects will be considered if funding is available.

Applications must be received by email by 5 p.m. November 2, 2018 to be considered.

More information on eligible projects and application instructions are available at https://deq.nc.gov/about/divisions/air-quality/motor-vehicles-air-quality/mobile-source-emissions-reduction-grants.

All month long, communities around the US have been celebrating National Bike Month 2018. May is halfway through, but there are dozens of bicycling events happening around North Carolina that are still to come — including this Friday’s Bike to Work Day in Raleigh, NC.

If you’ve never tried out a bike route to work, National Bike to Work Day is a great day to explore your options and meet other bicycling enthusiasts. Commuting with a bike can help you save money on gas, avoid traffic, get exercise, and be more environmentally friendly by not contributing to air pollution.

Fontaine Burruss, Bikeshare Coordinator for City of Raleigh Department of Transportation, said Raleigh’s Bike to Work Day event is for anyone from longtime bicycle commuters to those who are trying it for the first time.

“It’s a great way to both celebrate those who bike to work already, and also encourage people who are in interested in biking to work but maybe haven’t taken that leap,” Burruss said.

The City of Raleigh’s Bike to Work Day event will be throughout the morning and evening this Friday, May 18, with pit stops located around the city packed with refreshments and giveaways. Most pit stops will be around in the morning, ranging from 6 to 11 a.m., with one pit stop after work from 4 to 6 p.m.

To find the map of pit stops in Raleigh, view below (pit stops are indicated by the orange bicycle symbols) and click here for the interactive version complete with hosts and times they will be there. You can also map out your route and view bike lanes by using Raleigh’s online bike map or downloading BikeRaleigh’s free mobile app. 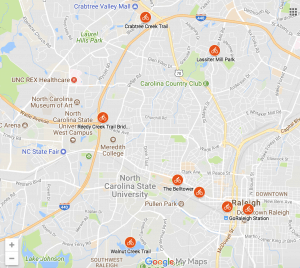 Raleigh’s Bike to Work Day is a one-day event, but Burress said she hopes it makes a lasting change in people’s lives.

“Often what we find is people who try it once realize it’s not as hard as they think it is to bike to work, and they’re open to trying more often,” Burress said.

If you can’t make it out Friday, Durham County will also have a Bike to Work Day event next Thursday, May 24, with several pit stops located throughout the city from 7:30 to 9:30 a.m.  Stop on your way to work for food and prizes; and for each location you stop, you also get entered into a raffle.

If you’re new to commuting, Durham County has a Bike Buddy program, where a partner can help show the way. View the Durham event map here and visit www.bikedurham.org for more information.

Before you go, be sure to check NC Department of Transportation Division of Bicycle and Pedestrian Transportation’s safety and education page to be aware of laws and safety measures when it comes to bicycling in the city.