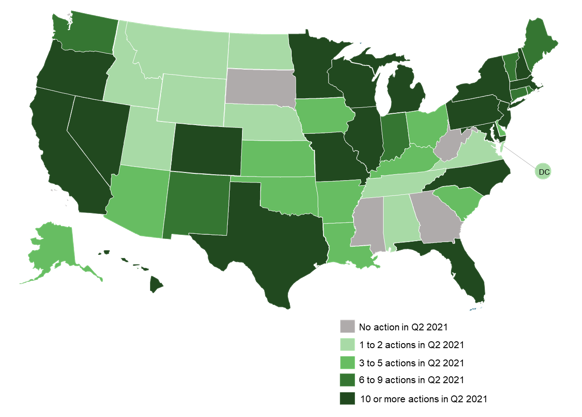 “As regulators continue to consider the appropriate role for utilities in the deployment of transportation electrification infrastructure, many utilities are filing proposals to pilot programs involving utility-owned charging stations in homes and at businesses,” observed Autumn Proudlove, Senior Policy Program Director at NCCETC. “Other states, however, have more firmly committed to a make-ready approach, where utilities own only make-ready infrastructure and not charging stations themselves.”

2021 Proposed Legislation on Electric Vehicles (as of Mid-July 2021) 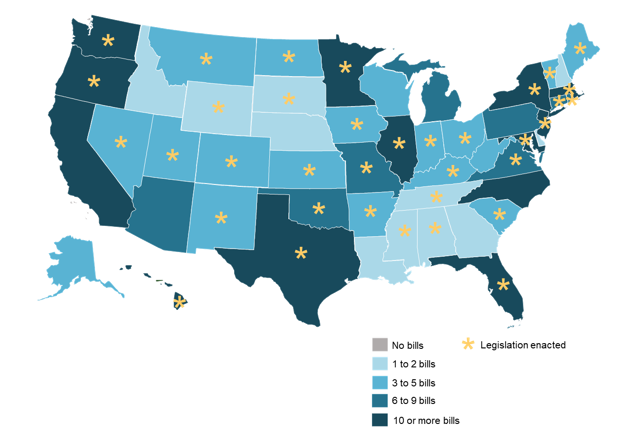 The report notes five of the top policy developments of the quarter:

“Following the actions taken this quarter, only nine states have not exempted EV charging station owners from regulation as public utilities in at least some configurations,” observed David Sarkisian, Senior Policy Project Manager at NCCETC. “Many states have moved on to other regulatory issues, such as determining the types of investments that electric utilities can make in charging infrastructure, and operating requirements and efficiency standards for charging equipment.”

The N.C. Clean Energy Technology Center, as part of the College of Engineering at North Carolina State University, advances a sustainable energy economy by educating, demonstrating and providing support for clean energy technologies, practices and policies. It serves as a resource for innovative, sustainable energy technologies through technology demonstration, technical assistance, outreach and training. For more information about the  Center, visit: http://www.nccleantech.ncsu.edu. Twitter: @NCCleanTech

A total of 211 electric vehicle actions were taken during Q3 2018. New Jersey, California, New York, and Massachusetts took the greatest number of actions during the quarter, accounting for over half of the quarter’s activity. 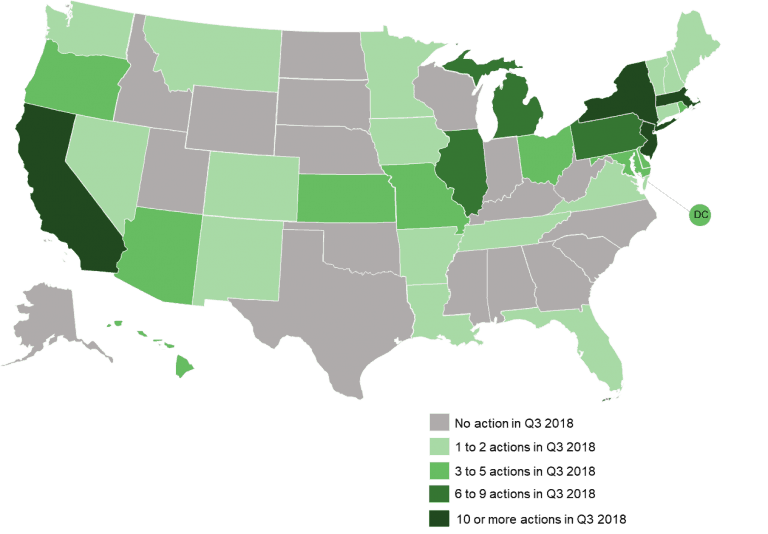 The N.C. Clean Energy Technology Center (NCCETC) released its Q2 2018 edition of The 50 States of Electric Vehicles. The quarterly series provides insights on state regulatory and legislative discussions and actions on electric vehicles and charging infrastructure. The full Q2 2018 report, or an annual subscription to the report, may be purchased here.

A total of 274 electric vehicle actions were taken during Q2 2018 – more than were taken in the entirety of 2017 (227 actions). Seven states – New York, New Jersey, California, Hawaii, Massachusetts, Vermont, and Minnesota – accounted for over half of these actions.

“Although the majority of electric vehicle policy activity is occurring in particular states and regions, many states throughout the country are beginning to study questions related to electric vehicles and address initial regulatory issues surrounding vehicle charging infrastructure,” noted David Sarkisian, Senior Policy Analyst at NCCETC.

• Governor Cuomo announcing up to $250 million for electric vehicle expansion in New York;

• The Public Utilities Commission of Nevada permitting NV Energy to own, operate, and rate base electric vehicle charging infrastructure; and

• The Vermont State legislature initiating an investigation into electric vehicles and charging.

“While we continue to see legislative actions on electric vehicles most concentrated in the states that are part of the Multi-State Zero-Emission Vehicle Taskforce, action pertaining to electric vehicles is occurring across the country,” noted Heather Brutz, Clean Transportation Manager at NCCETC. “This activity ranges from efforts to remove regulatory barriers to the creation of new incentive programs to directly promote vehicle and charging infrastructure deployment.”